We are approaching what could be a landmark election in Japan on August 30th. The ruling LDP are fighting for their political lives and the DJP are hot on their heels, appropriating slogans such as, “Yes, we can!” to encourage the perception of change.

Some things never seem to change in the Japanese electoral process, and one of these is the senkyo ka-(election car). Often with platforms for speech-giving are mounted on the roof, like this one below: 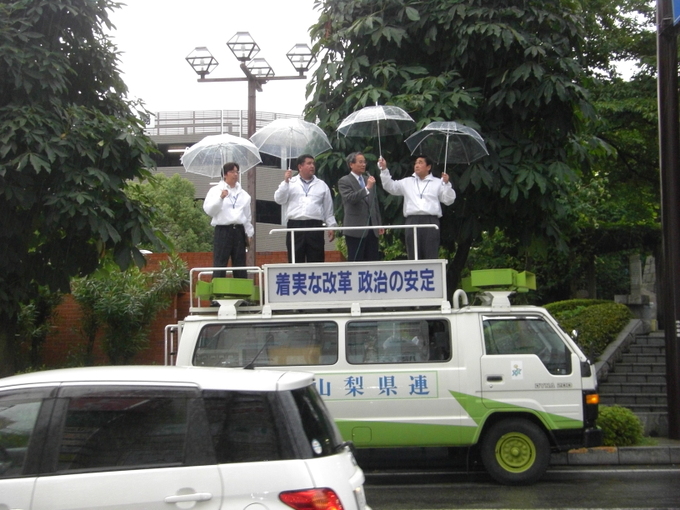 Then there are ever more elaborate ones – like the one I wish I had taken a photo of the other day – that are buses with something like a deck at the back from where the politicos wave at the plebs in the streets like plutocrats observing the common people from the comfort of their mega-yachts.

Whatever happens, I’m sure I can predict that a majority of Japanese will be happy when the anodyne speeches blasted out of these trucks’ PA systems finally end and we can enjoy some peace until the next election.

Not the most beautiful car in the world, the Toyota Century. In fact, it would not looked out of place parked in front of the Kremlin in the bad old days of the Cold War.

Its one redeeming feature is that, as far as I know, it is the only Japanese production car with a V12 engine, although it only puts out a lazy 276 horsepower. I just wonder what would happen if Japan had a cottage sports car industry like you find in the UK. I’m sure some bright spark would find a way to add a couple of turbos and shoe-horn this into a light chassis for some real fun. In the end, though, it must be one of the most frustrated engines in the world – doomed to spend its days trundling around in a glorified taxi.

Japanese kei (literally “light”, which is from the full name keijidousha, or “light vehicles”) vehicles first came into being 20 years ago. They are a separate class of vehicles in Japan, under regular cars, which are called futsusha (literally “regular cars”, surprisingly). They are built within certain size and CC limitations to qualify for this class. In addition to the obvious fuel economy benefits, they also qualify for tax breaks.

Since most urban driving speeds are so low in Japan (how many hours have I waited at red lights while taking 30 minutes to cover a few kilometers?), there is little need for a very much horsepower for city driving in this nation where two thirds of the population lives in built-up areas. And if you do have a house with a parking space here, you can find that it is only just large enough to park on of these micro-vehicles anyway.

If you are interested in these kei cars, you might want to check out our Japanese car auctions to see all the different varieties that are available.

Japan may be renowned for its world-leading car manufacturers like Toyota and Honda, but in recent years car ownership has been dipping slightly. It first rose above 0.5 cars per household (in other words, 1 for every two households) in 1976, and then breached the 1-per-household mark twenty years later in 1996.

First of all, Japan is a small country with very limited space (which explains why a large metropolis like Tokyo has a rate of 0.497 cars per household), so it is unlikely that car ownership would continue to climb much beyond one per household. Japan also has an excellent public transport system, so there is no need for a car if you live near a station and work in the downtown area. The recession hitting at the end of 08 cannot have helped much either. Finally, the allure of the “my car” culture is apparently being replaced by newer gizmos like MP3 players and iPhones among young people.

Don’t worry, though! There are still a lot of cars left in Japan, tens of thousands of which you can buy each dat in the Japanese car auctions.

Insight or Prius …. or Leaf?

The Honda Insight stole a march (not a March) on the latest Toyota Prius when it arrived in Japan in early 2009. I remember seeing a TV news report here at the time implying that the Insight was not only selling better than Honda’s expectations but that, in fact, it was pretty much the only Honda model that was making it out of the showroom at all.
(Honda were not the only one struggling at that time: In the depths of winter when the prospect of a second Depression seemed very real, we heard that Lexus dealers in Kyoto had managed to sell just one single car in a whole month. Perhaps it was just a rumor, but it seemed very believable at the time.)

Anyway, it seems that the Insight has had its moment of glory: As soon as the new Prius came out, the spotlight shifted. Now it is Toyota who are beating their sales forecasts and the (cheaper) Insight is left languishing. Part of this is probably due to the Prius’ carefully-cultivated brand image. “Hybrid” and “Prius” are almost synomymous, after all. It does not help that it is also seen as an inferior car – however good its fuel economy. Apparently, Honda is working frantically on upgrades, but there are also some tuners out there who are coming up with their own as well. OK, so it might not go faster, ride better or have better economy – but it beats the pants of the standard version when it comes to looks.

The difference in the two brands can also be seen in the sold prices in the Japanese car auctions. I had a look at sold prices for the Prius S and Insight G. Taking sold price results from the last 3 months, the outcome was quite surprising:

(* This is the average price for cars with delivery mileage only in perfect new condition. Obviously cars with greater mileage would be cheaper. If you want to explore the Japanese car auctions for yourself, click here.)

Whoah! Wait a minute. Let’s look at those Prius prices again. The auction price is higher than the new list price? What is going on there? To be honest I am really not sure, but there are a couple of guesses I will throw out there. First of all, it could be caused by demand. If you have customers beating down your door for a new Prius and Toyota can’t crank them out quickly enough, you need to get your hands on a basically new one to keep up. Another possibility would be that that maybe Toyota customers specify a whole raft of optional equipment on their Priuses which means that these ones at auction were actually worth quite a bit more than the base model to start with. But surely some of the Honda’s would also fit that pattern and yet they show depreciation.

This is all well and good, but what I am wondering is whether in the longer term both of these companies are going to be leapfrogged by Nissan, who seem to be bypassing the hybrid model almost completely and are aiming at having a range of all-electric cars. I can see how Toyota’s lead in hybrid technology would easily become a hiderance. Japanese firms are notorious for clinging to technology they have pioneered long after it has become obsolete. The MiniDisc player is a classic example of this. So Toyota wins the battle, but who will win the technology war?