Perhaps the most available car in the Japanese used car auctions is the Toyota Prius.  Due to it’s huge numbers, the prices can be totally predictable.  Removing “black” Prius’ from the data (black colour doesn’t seem to behave in the same manner as the other colours), results for Prius sales in the last few months.  The Prius targeted was the 2010 model.   The price the car sold in the auctions was plotted against the kms of that vehicle. All vehicles were grade 4.

Here are the results: 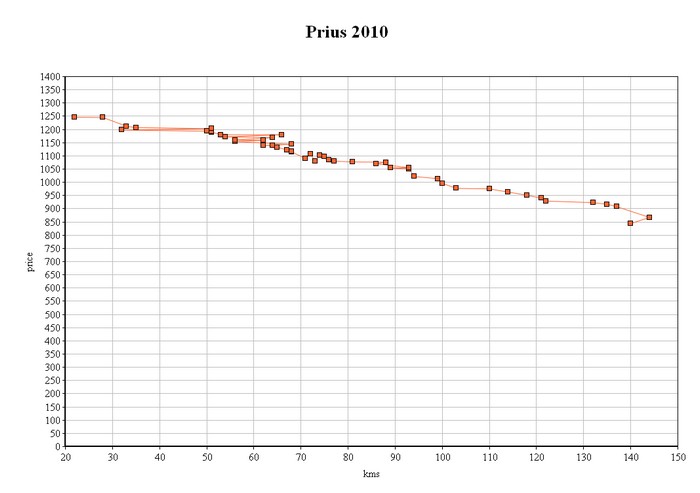 In Japan the main car dealers such as Toyota, Honda and Nissan only sell new cars. Used and new cars are usually not displayed on the same yard. When you trade your car in for a new one it is unlikely to stay on that dealers yard long.

Most car manufacturers have their own auctions (TAA auctions, Nissan auctions) or they have deals with the big auction companies, USS Auctions for example. USS auctions, the biggest auction group in Japan owns a company called Gulliver which is the largest trade in house in Japan. The USS auction group also produces a book of previous car sales that dealers carefully devour before setting the sell prices in the auctions. This lists every car sold in the USS auction over that last month.

Many other auctions provide used data so buyers and sellers will have an idea of potential sale price of a vehicle they are buying or selling. Used car pricing is very accurate due to the large number of vehicles going through the auctions every month.

So, when you bid on a vehicle in the auctions, expect it to sell at comparable prices in recent months. Both the sellers and competitor buyers are all looking at previous auction selling history.