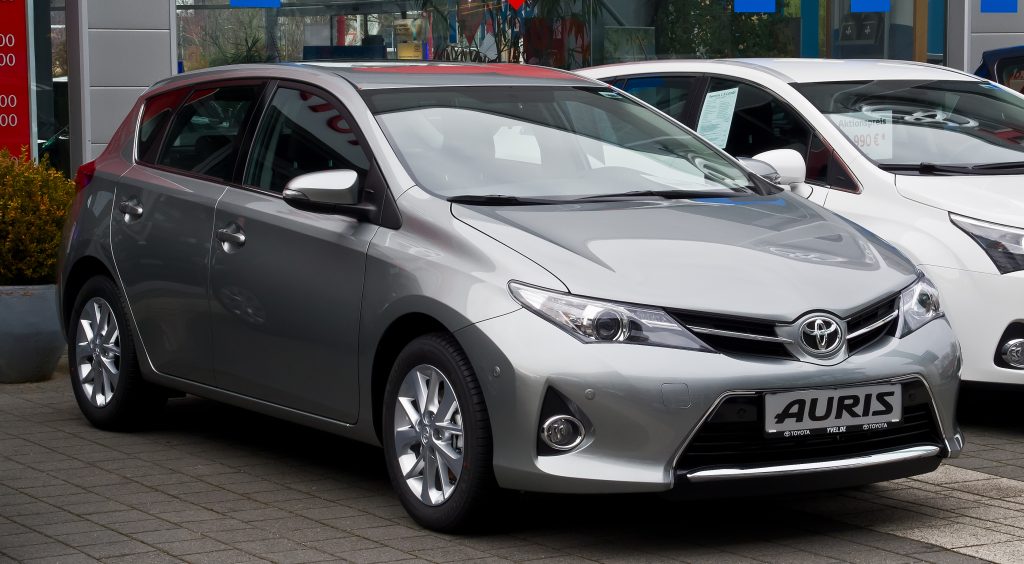 The name „Auris“ comes form Latin and it means gold. And it was definitely a good choice, as the Auris is Toyota’s best selling car in Europe. It’s a compact hatchback that was introduced back in 2006, the second generation competing with the Volkswagen Golf. the Opel Astra and the Ford Focus. In Japan, however, it’s considered a medium size car that is generally very good for out of the city road trips.

It comes with loads of engine options and to be frank, they are all good, but some are better than others. It comes with three options: petrol, diesel and hybrid. There are also some fully electric models, but they’re not yet released.

When it comes to petrol, we recommend the 1.2 L 116 bhp inline 4 cylinder engine. It may not be the most powerful, but it’s not very much way off the top of the line version, not to mention you meet regulations tax almost everywhere around the world.

For the diesel version on the other side, you don’t have really too much to choose from. Both 1.4 and 1.6 engines are good, but we would go for the 1.6 as, overall, it’s a better performer.

This, of course, being a Toyota, it comes with a CVT transmission and we were expecting the automatic version to be bad. Unfortunately, our ‘hopes’ were confirmed. We don’t know what is up with Toyota, but sooner or later they will have to find a way to fix the clunkiness of their automatic gearbox.

The interior of the latest Auris model seems boring, but you do get a lot of options in the standard version, not to mention that the build quality never disappoints.

It’s fairly cheap to run, while mileage on the engine models we mentioned earlier is pretty good as well. For the petrol version you get around 6.5 L / 100 km, while the diesel can go as low as 4 L / 100 km, depending on your driving style.

The price of the last generation Auris starts at around $18,000, with fairly good options and in most countries you will get them with a 5 year warranty. This has to be the car’s best strong point against its rivals.

The clunky CVT automatic transmission is always a disappointment. The full reality is that it is about 15% better than a regular transmission, but that really isn’t enough.

The hybrid system doesn’t seem to be all that good. A base hybrid model starts at around $23,000 and the fuel consumption drop isn’t all that great. So if you want an economical version, stick with the diesel.

The interior of the car is extremely boring and uninspired. It’s outclassed by the German rivals and sadly, not even in the exterior department it doesn’t score better.

The Auris is a car for the person who just wants a good, reliable Japanese car that can get him from A to B without any worries.

AutoExpress – „If you’re after a car for straightforward A to B transport, the Toyota Auris could be for you. It’s practical, dependable, comfortable and cheap to run.”