How are Cars Shipped overseas?

Thousands of cars are shipped across the sea every year from Japan.  Some ships can carry as many as 8000 cars. Considering the volume of cars that are sold at the Japanese auto auctions one has to wonder what kind of ships will be built in the future?  A 10,000 car ship?

As you can see in the photo below one method that is used to get the cars on and off the ship is the RoRo (Roll on/ Roll off).

Another method is using shipping containers.  Cars are held in place by cable wires.

The photo below shows the Vert a Pac rail cars.  It was a way to transport Chevy Vegas by placing them vertically.  It was a way to cut transport costs.  Preventative measures were taken to keep the fluids from pouring out from putting in an extra fuel line and placing the windshield wiper fluid at a 45 degree angle. 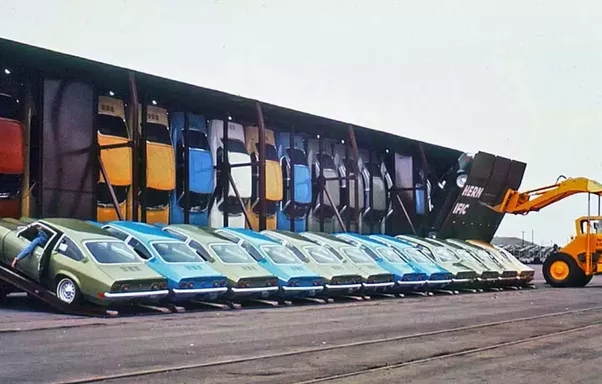 Transporting methods have changed since the 1970’s.

When one considers the entire process of getting a car from the Japanese auto auctions it’s absolutely incredible how every car is handled with care until it gets to it’s owner around the world.